On winning a Marie Claire Future Shapers award: why it matters to me

Last night, Marie Claire, one of the world’s most respected and well-read women’s magazines, put VR and inclusion on the national agenda by dedicating an award to it at a star-studded ceremony — presenting me with a Future Shapers award for virtual reality sector innovation.

I was deeply honoured to see Limina’s influence on the UK VR sector being recognised like this, to see it noted, so early on in a medium’s development. It is important to acknowledge the work of creating a context for creative VR content that is ‘normal’ for broad, mainstream audiences.

The needs for more female role models and representative leadership are central to the Future Shapers ethos. This is certainly something we need in VR. The UK immersive sector is fast growing, now having as much as 9% of the global market share (NESTA 2018). However, only 14% of VR company’s in the UK have any female representation in their leadership. There is also a gender gap in audiences; 20% of UK men have experienced VR vs 14% of women (EY 2017). The majority of VR spaces, tools, experiences and games are being made by men, for men. Male bias is being deeply woven into this new sector as we speak.

This needs to change, of course, especially if VR is going to be as big as the cultural heavyweights of cinema, radio or theatre (as many analysts predict). The good news is that it is early days. The industry is still malleable — the gatekeepers haven’t been established yet and norms are still being shaped. Really, it is still all to play for. This is why the notion of such a widely-read women’s magazine engaging with the sector is so damn exciting. This recognition will mean more women feeling that this isn’t a gimmick or a ‘boys’ toy’, more women contributing to the medium’s development, and more women feeling that they have the permission to get involved in this creatively and commercially fruitful space.

I have dedicated this award to the women who work in the VR sector. Why? Because historically, women have been written out of technology’s history, and it is already happening in VR. We can’t let this happen again. When you Google ‘history of VR’, not one woman comes up on the first page of results, apart from on Wikipedia. Women of VR need to be recognised for the incredible work they are doing. Thousands of women across the UK are devoting their career to this new, risky and uncertain medium. This is why I am dedicating this award to this wonderful community of female pioneers. 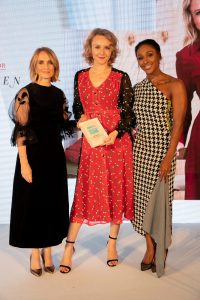 To see our Vision for Women and VR, visit www.vwvr.org — a vision statement for the future of the industry that was created with generous support from King’s College London, The University of Brighton and Refig

The free online CSS minimizer and beutifier will compress the style files for your websites in seconds.